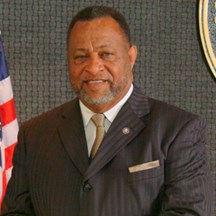 During his tenure on the Montgomery County Commission, Elton has been able to achieve a great deal for the county, with the help and support of his colleagues. Those accomplishments include, but are not limited to:

Elton was married to the late Lillie Hardy Dean. They have three children, Dawneese Bowen, Elton “Deno” Dean, Jr., and Brandon Dean. He is the son of the late Mary Dean Johnson and Dr. William Johnson.

·         Former Board of Trustees Chairman (9 years), Alabama State University – responsible for $525 million worth of campus improvements during Chairmanship